From humble beginnings on Kangaroo Island to multi award winning internationally renowned chef, Craig Squire is a culinary journeyman specialising in Australian Modern Cuisine with a passion for showcasing fresh local Australian produce to the world! Recognised as a pioneer of ‘Australia’s Modern Cuisine’, Craig has been plating up award winning dishes in Cairns at Ochre Restaurant and major events around Australia for over 20 years. Having recently consulted on the opening of the ‘Bushman’s Restaurant and Bar’ at Anantara Resort and Spa, The Palm Dubai, and being appointed by Restaurant Australia as Queensland Ambassador helping to promote Food and Wine Tourism in Tourism Australia’s high profile campaign, Craig continues on his quest to satisfy palates across the globe with his unique Australian Modern Cuisine. 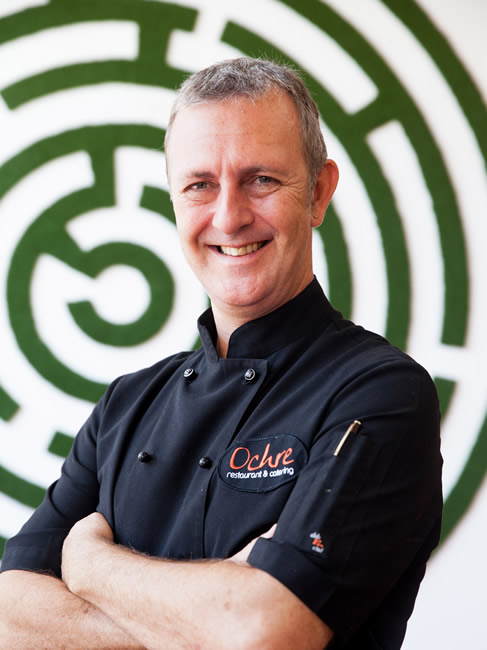 1985 – Traveled and worked in kitchens along the east coast of Australia before returning to Kangaroo Island to open ‘Gaby’s Restaurant’ at the age of 21.

1986 – Seeking a change of scenery, moved to Breathtaker Ski Lodge for the winter as head chef before moving to Port Douglas.

1987 – 1989  – Overseas to several positions including helping set up Johnny’s Wine Bar in Earlsfield, London and Chef Saucier of the acclaimed Kensington Place Restaurant before a ski season at the Michelin Star Sport Hotel Reisch restaurant in Kitzbuhel, Austria and then back to London to work as Head Chef at Coates Restaurant and Bar, London Wall.

1990 – 1992 – Returned to Australia as sous chef at Fish of Melbourne Street then LeEntrecote Brassiere, Eagle on the Hill Hotel and Cafe 48 where his interest in Bush Foods and creating an identifiable Australan Cuisine was initiated.

1994 – 2007 – Opened Red Ochre Grill Cairns specialising in Modern Australian Cuisine and was invited to become a member of the Catering Institute of Australia and Les Toques Blanches International. Craig’s experience in the successful use of Australian Bush Foods is probably the most reviewed and long standing in Australia colleting a number of accolades in along the way including; Mietta’s Diners Club Australian Restaurant guide ‘Top 100 Restaurants in Australia’, finalist of the Queensland Signature Dish, Tourism Tropical North Queensland Hall of Fame member – Best Restaurant and cookbook features in Mietta’s Great Australian Chefs publication , Simply Australia, Fine Food from Country Australia, Dining High. Craig was active in forming a regional food industry group now named australiantropicalfoods.com to promote regional foods, its growers, producers and its cuisine. He has also been active in education of apprentices and the public in the use of native and regional foods, gives lectures and presentations at TAFE, Feast of the Senses, Cairns Show and for the Department of Primary Industry and in 2003 was appointed to the National Restaurant and Catering Industry Leaders Group to format a new direction for the future of our industry.

2001 – Singapore – guest chef at the Dutch and British Clubs